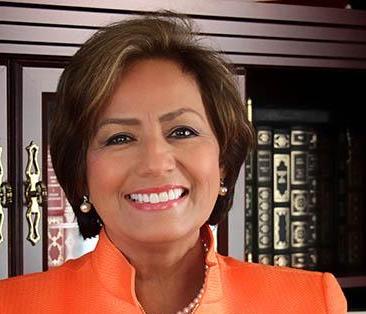 From Illiterate Mexican Immigrant to Treasurer of the United States

Rosario was born in Mexico City. Despite Rosario’s opposition as it will hinder her upcoming quinciañera party in 1972 her family moved to US and settled in Southern California.  Her father worked as a janitor and her mother as a seamstress.  Rosario was 14 and did not speak any English, which lead her to fail the High School standardized tests, and was labeled as mentally disabled. This lead Rosario Marin to study harder and graduating High School with honors; she was 20 out of a 500 students class.

Rosario enrolled East Los Angeles College and attended classes at night while working during the day.  She later continued her studies at the California State University graduating in 1983 with a Bachelor's in Business Administration and Marketing degree.

While attending California State University she also worked as an assistant receptionist at City National Bank. Quickly promoted in three years Rosario was assistant to the vice president.   In 1985 she had to quit her bank job to take care of her son Eric who was born with Down's Syndrome.  Her son's condition inspired Marin to become an advocate for the mentally disabled and she founded Latino support groups for disabled children and became an advocate on their behalf in California.  In 1992 Rosario was appointed by the Governor as chief of Legislative Affairs for the Department of Developmental Services and two years later she was named chair of the Council on Developmental Disabilities.

In addition to her public advocacy work, Rosario became politically involved and in 1994 Rosario, still working in State Administration, won a city council seat in Huntington Park where she served seven years and became the city’s first Hispanic mayor.  Rosario continued to work for the Governor’s office becoming serving on several commissions and boards including vice-chair of the Latino Caucus the Southeast Community Development Corporation.

On August 16, 2001 Rosario was named the 41st Treasurer of the United States becoming the only U.S. Treasurer ever born outside U.S. borders.

Rosario has been recipient of many awards including the United Nations "Rose Fitzgerald Kennedy Prize" for her work on behalf of the mentally disabled, the Outstanding American by Choice Award and the Excellence in Public Service Award.

Rosario a US citizen since 1984 is the author of Leading Between Two Worlds: Lessons from the First Mexican-Born Treasurer of the United States, holds numerous leadership positions with nonprofit boards and is recognized among most influential Latinos in America.
More info.   http://www.apbspeakers.com/speaker/rosario-marin