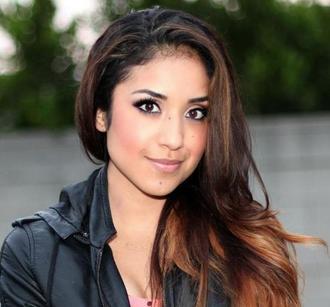 Dulce Candy was born in Zacapu, Michoacán, Mexico on August 20, 1987

In 1994 at age 6, her mother illegally brought Dulce and her sisters to the United States to joined her father who was an agricultural laborer working in California. After a rough road sleeping in garages, jumping fences and swimming in the middle of the night, the family eventually made it to Southern California.

Dulce Candy spent most of her childhood living Oxnard, California in a 2-bedroom trailer park.  In 2006 after graduating from high school, time in which she suffered depression, Dulce decided to join the US Army.

She initiated her training in Fort Jackson, South Carolina. She later became a certified generator mechanic and was assigned at Fort Hood, Texas. From 2006 to 2008 she was deployed to Iraq for 15-months where she served as mechanic and military driver. Dulce experienced combat several times while driving VIPs into the “Green Zone.” She earned a combat action badge for her service.

When she returned to the United States, Dulce started working as a mechanic. In 2008 as a way to add more femininity to her life after wearing uniform for so long, Dulce turned the camera and began talking about makeup and fashion and uploaded the video to YouTube. Soon enough Dulce Candy was posting video makeup tutorials she prepared in her free time.  In 2009 Dulce appeared as a “Beauty Smartie” in Seventeen Magazine becoming more serious about her work social digital presence.Today Dulce Candy is a successful video blogger who publishes Do-It-Yourself and tutorial videos to her enormously popular YouTube channel DulceCandy87.  She is also the CEO of Dulce Candy, Inc. a business dedicated to fashion, beauty and lifestyle and author of a book titled “The Sweet Life.”

As a top fashion and beauty icon for the social media generation, Dulce Candy has 1 million Instagram followers, 2.6 million YouTube subscribers and close to 250,000 Twitter followers.  She has also signed contracts to provide content for companies like L’Oreal, Macy’s, Olay, Cover Girl, Kohl’s and Too Faced.

Now a U.S. citizen Dulce, lives in Los Angeles with her husband whom met during her time they were both serving in the military.  They have a 3-year-old son.

On the 7th Republican debate Dulce Candy featured a video question to the GOP candidates: “There are many immigrants who contribute positively to the American economy, but some of the comments in the campaign make us question our place in this country,” “If America does not seem like a welcoming place for immigrant entrepreneurs, will the American economy suffer?”