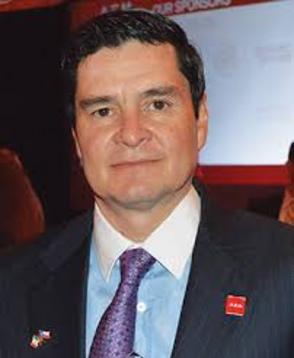 650 units - the 7th largest restaurant franchisee in the United States

Guillermo began his professional career with a Mexican company that had businesses in the U.S.  After an initial attempt to open a Golden Corral restaurant in Mexico in the early 1990’s Guillermo immigrated to the United States in order to pursue his dream of becoming a successful business owner.

With no experience or connections within the restaurant industry the franchise business model gave him the opportunity to open what would be the first restaurant of his business empire.  In 1997 with the help of a $100,000 Small Business Administration Loan, Guillermo opened a Golden Corral restaurant in Dallas, Texas.

Soon after Guillermo Perales founded Sun Holdings Inc. a company designed to manage his future restaurant ventures. In just 10 years the company became the largest franchisee for Golden Corral and the second largest in the Popeye’s chain restaurants.

For his leadership and entrepreneurial skills Guillermo has been recipient of numerous awards.  In 2015 The International Franchise Association named him Entrepreneur of the Year. He has been featured on four occasions in Latino Leaders Magazine's annual "101 List" as one of the most influential Latinos in the United States. In 2008 Guillermo was recognized as Entrepreneur of the Year Award for outstanding leadership from Ernst & Young and the Asociacion de Empresarios Mexicanos. He also was recognized by the Dallas Business Journal with the Minority Business Leader Award and received the International Business Achievement Award by the Regional Dallas Chamber's International Business Council.  In the year of 2013, Guillermo achieved the American Dream Award.

Guillermo Perales has been an influential member of several organizations nationwide, serving on IFA's Board of Directors, the Southwestern Medical Foundation, the National Franchisee Association, the Southern Methodist University, 21st Century Council, the Greenhill School Board, the National Association Management Group, the Latino Hotel and Restaurant Association, and the Burger King Diversity Advisory Board.

Along with his business ventures Guillermo Perales is active in the community through his philanthropic work.  His restaurants serve 25,000 free meals to American heroes every Veterans Day and distribute over 4 million Certificates of Achievement Awards for free meal vouchers to children annually. Recently, his Burger King restaurants awarded 180 scholarships from $1,000 to $10,000, to local students in need of financial support to further their education.