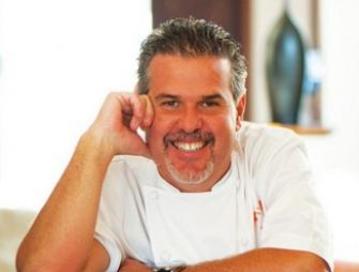 Richard was born in Acapulco, Mexico in 1967.  The son of an expert restaurateur, Richard had its first culinary experience on his grandmother kitchen learning as she cooked traditional Mexican Food for the family Sunday meals.  However, before completely joining the culinary business Richard spent part of his youth was travelling the world as a professional tennis player.   Later he decided that his passion was the cooking business and enrolled in the Culinary Institute of America in New York.

After graduating Chef Richard Sandoval returned to Mexico and worked four years at one of his father’s restaurants, he learned the details of running a successful business.  In early 1990s, Richard moved to New York to open what would be the first of an international restaurant empire, the contemporary French food Savann later followed by the Savann Est.   After a extraordinary reception from New Yorkers, Richard decided to go back to his grandmother’s teaching and in 1997 opened Maya, considered by The New York Times one of the pioneers of authentic Mexican cuisine in America.   Because of the success he later opened in Maya San Francisco, and Tamayo and Zengo in Denver.

Richard is co-author of Modern Mexican Flavors and part of The Culinary Institute of America’s Board of Trustees.  He has been recipient of numerous awards including 1992 Mexican Chef of the Year by the National Toque d’Oro , 2003 Best Chefs by New York magazine, 2006 Restaurateur of the Year by Bon Appétit and 2012 Cordon d’Or Resaurateur of the Year.   In 2104 he received an honorary doctorate of Culinary Arts and Food Service, from Johnson and Wales University.  At the graduation ceremony the Dean of culinary education said "There are plenty of great cooks, but you have to run the business and know every aspect of the front and back of the house."

In a recent interview Richard said “One of my next goals is to take Mexican food to Europe; I think people will enjoy the different notes, boldness and the warm that’s characteristic of Mexican food.”