Fernando the youngest of twelve siblings was born in a small town in Sonora, Mexico in 1960.   At 17 he started his baseball career pitching in Mexico’s Baseball League.  Because of his record several Major League Baseball teams had him on the radar however, it was the Los Angeles Dodgers scout that in 1979 bought his contract.

Fernando that did not speak any English when he came to the US made his major league debut in 1980, he was 20 year old.  On his phenomenal rookie season the Mexican left-handed won his first eight games finishing the season with 13 wins and 7 loses. He was the league's leader in strikeouts, complete games, innings pitched and shutouts.  Fernando also helped the Dodgers win its firsts World Series in 16 years by pitching 3 post-season games including Game three of the World Series against the New York Yankees.  He was named Rookie of the Year and received the best pitcher in each league the Cy Young award, being the first rookie player to win both Awards in the same season.

Suddenly Fernando’s now nicknamed by L.A fans as "El Toro" (the Bull), became a media phenomenon known as “Fernandomania” that with its unusual sky look before every pitch attracted crowds all over the country.   In Mexico the fans routinely followed him as every game was live TV broadcasted.

Fernando spent 11 years with the Dodgers winning again the 1988 World Series.  In 1991 he left to play between in the Majors and the Mexican League.   Fernando retired in 1997.

During his successful career Fernando was a six times an All-Star team selection and in 1986 tied a 50 year old All-Star Game record by striking out five consecutive American League batters.  He earned two National League's Silver Slugger awards as was also good offensive hitter.  In 1990 he threw a no-hitter against the St. Louis Cardinals. Fernando Valenzuela is a member of the Hispanic Heritage Baseball Museum and the Caribbean Baseball Hall of Fame.

In July 2015 thirty-six years after first entering the US Fernando became a US citizen and joined President Obama’s "Stand Stronger" Citizenship Awareness Campaign to help the White House promote the rights, responsibilities, and opportunities of citizenship among eligible lawful permanent residents in the Los Angeles community. 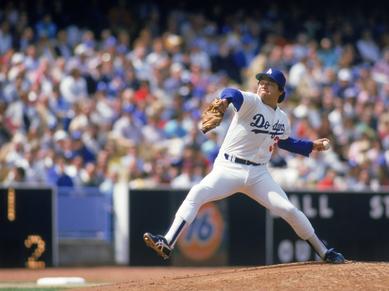