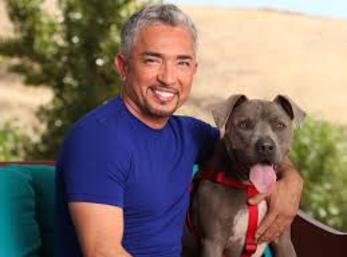 César Millan was born in 1969 in Culiacan, Sinaloa, Mexico.  Living at his grandfather's farm Cesar grew up working with animals with the dream to become the best dog trainer in the world.

In December of 1990, 21-year-old Cesar illegally crossed the border from Mexico into California.  He did not speak English or knew anyone and spent his first couple months homeless on the streets of San Diego.   He got a grooming and walker dog job and soon   got a reputation for his abilities.   After saving a few dollars he moved to Los Angeles and kept his job dog walker now having celebrities’ clients including Jada Pinkett Smith who became one of his biggest supporters.

At a vacant parking lot he started a freelance dog rehabilitation service for dogs that became the Dog Psychology Center, today 43-acre site in the Santa Clarita Valley.

After an article in the Los Angeles Times he was reached to develop a TV show. The show Dog Whisperer aired in 2004 to later become an Emmy-nominated and National Geographic's number 1 show.  The show is now broadcast in more than 80 countries.

Cesar now as US citizen, is a best-selling author, public speaker, and for may the most recognized authority in the field of dog care and rehabilitation techniques.

Cesar has been recognized as a positive image of Hispanics in the media.  His Foundation supports children compassion, social skills, and self-awareness to avoid bullying in schools.