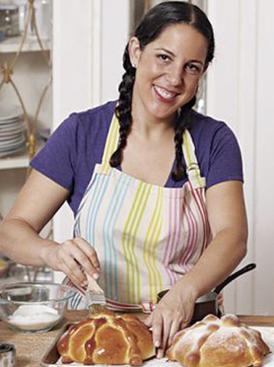 Born and raised in Mexico City, Fany's dream was always to become a chef.  After two years in cooking school in Mexico where she learned about Mexican culinary culture, Fany moved to New York and enrolled at The Culinary Institute of America.

Fany did an externship in Spain and later worked as a pastry chef in New York high-end restaurants Eleven Madison Park and Rosa Mexicano earning her a reputation with her Mexican flavor on classic desserts.

Wanting to write a book about Mexican candy she got a book deal from a publishing company and spend a year traveling through out Mexico researching regional specialties.  After finishing “My Sweet Mexico” a book on Mexican sweets and the culture behind it, Fany returned to New York now with the need to open a business and continue sharing the sweets of Mexico.

In 2010 with a cart in a market she started la “Newyorkina” a business that sells paletas - a Mexican-style artisan ice popsicles.  After a very successful summer she expanded and today her paletas can be found from carts all over New York.

Fany later opened Dough a donut shop that in a couple of years grew from a small shop in Brooklyn to five locations throughout New York.  Now dozens of third party vendors sell Dough pastries.

When asked why she started her first business Fany said she wanted “people to understand that frozen desserts are just as special, unique, and delicious if they're from Mexico.”